How to turn tax into more superannuation

Because of the way that tax is applied to superannuation, savvy employees can actually turn what would have been a tax liability into extra super by making use of a salary sacrifice arrangement.

Many workers can, by agreement with their employer, have money paid into their super fund from their salary before income tax is taken out. These before-tax contributions to a super fund can reduce their tax bill and also boost their super savings.

And the boss should generally be happy to do so, as any amounts contributed to super in this way (to a “complying” super fund) are not considered by the Tax Office as a fringe benefit, so your employer will not have to pay fringe benefits tax on that money.

Amounts directed to a super fund via a salary sacrifice arrangement will be taxed in the hands of the fund, at the rate of 15%. So however much you can put away will escape being taxed at your marginal rates, which in most cases will be more than the rate levied on the super fund.

Put more into super, and save tax

By way of example, let’s consider the case of Michael, who earns an annual salary of $90,000 (excluding the super guarantee). If he makes before-tax contributions to his super fund of $10,000 through salary sacrifice, not only will he significantly boost his retirement savings but will save $2,400 in tax.

Of course, in the no-salary-sacrifice scenario, Michael has a higher take-home pay of $66,953. But with salary sacrifice there is less tax and more super – a very handy annual boost to Michael ‘s super fund. He would of course need to make sure his total super contributions (which would include the compulsory super guarantee amounts) stay under the contribution caps.

And even after pumping up his super contributions, there are further tax savings for Michael because the earnings his money is making from investments via the super fund are taxed at 15%. The tax on investment earnings outside of super are taxed at his marginal tax rate of 39% (including 2% Medicare levy).

See table on the next page. 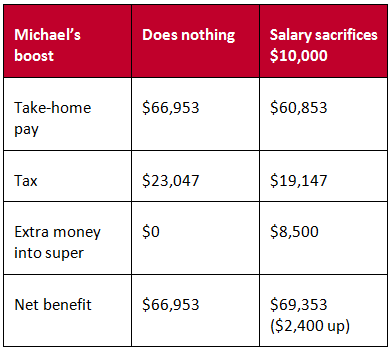 DISCLAIMER:All information provided in this publication is of a general nature only and is not personal financial or investment advice. It does not take into account your particular objectives and circumstances. No person should act on the basis of this information without first obtaining and following the advice of a suitably qualified professional advisor. To the fullest extent permitted by law, no person involved in producing, distributing or providing the information in this publication (including Taxpayers Australia Incorporated, each of its directors, councilors, employees and contractors and the editors or authors of the information) will be liable in any way for any loss or damage suffered by any person through the use of or access to this information. The Copyright is owned exclusively by Taxpayers Australia Inc (ABN 96 075 950 284).